Today’s entry is all about fun. It’s a particular kind of fun, too; the kind of fun that involves crazy weapons and ever more creative ways to kill your enemies. The kind of fun where the good guys always win, but there are always more bad guys to fight even though I could swear we’ve killed every bad guy in the world several times now.

It’s the kind of fun you’re in for when you start to read Axe Cop.


Axe Cop is a story about a cop who has an axe. He uses his axe to kill bad guys.


It’s a simplistic premise, but things get wicked complicated. Axe Cop’s best friend and partner is Flute Cop, who sometimes turns into Dinosaur Soldier, or Avocado Soldier, or, as seen above, Ghost Cop. A whole host of other characters show up as good guys who ally with Axe Cop or as bad guys who fight him. The world operates according to its own surreal logic that bears little to no connection to reality. (Getting blood on you turns you into the kind of thing that the blood belonged to! I mean, obviously.)

I’ll note here that I’m not going to worry the slightest bit about spoilers for Axe Cop. The joy of reading Axe Cop is in the concepts, the big ideas and the little quirks that make this a piece of entertainment like no other. The plot itself is secondary, and is best enjoyed as it comes rather than dissected and anticipated. We’re not here for intricate plot twists. We’re here to see some good guys using their awesome weapons to fight bad guys.


The origin of Axe Cop in the real world is that a five-year-old kid describes what happens in the story, which is then drawn by his twenty-nine-year-old brother. Axe Cop has been running for a while now, and the kid who generates the ideas is now ten, but it still works the same way, and, importantly, it still has the same feel.


This is a child’s imagination game laid out on paper, and it is magnificent. (I guess it’s not so much laid out on paper as rendered on a screen, but that just doesn’t sound as impressive.) The stakes are high, the morality is black and white, the good guys always win, and this comic constantly surprises me. One thing that I’m constantly looking for in media is an idea that I would not have been able to come up with on my own. Axe Cop usually delivers several of them per page. 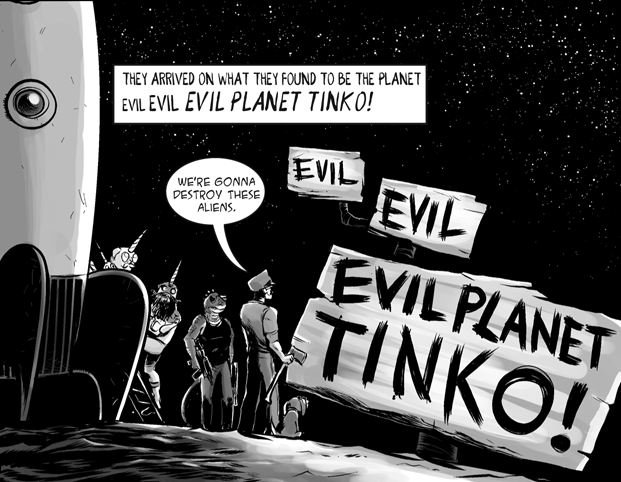 Sometimes the events in Axe Cop don’t feel like a story I’m reading so much as like a dream I’m having. There’s that free association of ideas that comes when you’re just listening to pure creativity without self-editing. Absurd things happen and then the justification comes later, or there’s no justification at all. It’s freeform storytelling of the kind that can only happen when no one is listening to the rules that usually keep stories in order. In Axe Cop, the rules are flexible. Unless you are a bad guy. If you are a bad guy, Axe Cop will show you no mercy.

As you may expect, with a story written by a child, there is very little artifice, no apparent agenda to the storytelling, and never a hint of a moral. Axe Cop is pure entertainment, unadulterated (such an appropriate word) by any sense of what stories or media should be telling the audience.

The reader gets a very clear sense of Axe Cop’s authorship. This comic is a little boy’s wonderland. There’s fighting and giant robots and zombies and the good guys just want to kill all the bad guys and I’m not really sure what most of the bad guys’ motivations are but that doesn’t really matter because they’re bad guys. Reading Axe Cop is a refreshingly pure experience, taking a step away from all the subtle commentary and allegory that can be found in almost all fiction.

While there’s no obvious intention for this comic to rise up and fight the status quo, we do get to see a child’s perception of the way the world does or should work, and that perception turns out to be slightly different from the cultural expectation. It’s fascinating, and potentially troubling, if you think through the full implications, but it’s definitely a different direction than the one we’ve come from. This is a snapshot of the cultural milieu through the filter of a child’s imagination and I don’t want to read too much into it but if I did want to, I absolutely could. 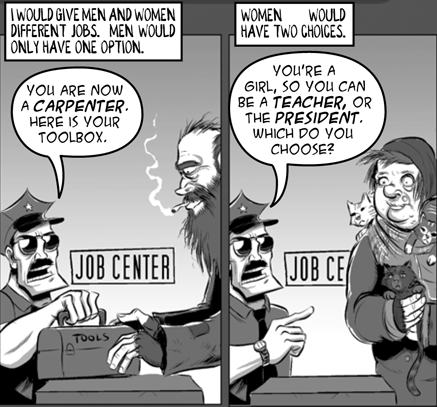 Figuring out where to begin can be a challenge. Well, I’m here to tell you that if you’ve never read Axe Cop before, the place to start is here. Read the first four pages, and then read this one. And then just keep going.

Of course, once you get into the story, things are further complicated because the main comic runs concurrently with a segment called Ask Axe Cop, which is in a different section of the archive. Stuff that’s established in Ask Axe Cop frequently shows up in the main comic, so it’s a good idea to try to read both of them at the same time, but it can be tricky figuring out when you should read each Ask Axe Cop with reference to where you are in the main archive. I recommend just reading the main story until you reach a footnote directing you to Ask Axe Cop, and then reading a bunch of Ask Axe Cop until you’ve read the one that the footnote was talking about.

There’s a third set of comics, called Axe Cop Presents, which can be read whenever you want because it doesn’t affect the Axe Cop continuity. Axe Cop doesn’t appear in those comics, but they definitely have the same feel to them, so if you enjoy Axe Cop, you should definitely check them out.

There are two Axe Cop stories that have only appeared in print, “Bad Guy Earth” and “President of the World.” Events from those stories are mentioned in the online comic, but remember how I said I wasn’t going to worry about spoilers? The same principle applies here. Feel free to read everything that’s online and any time something comes up that was introduced in a print comic, just roll with it. Accept the new information and move on. Then, someday, when you get a chance to read the print comics, I recommend you do so because they’re great. Just don’t let them hold you back from reading what’s immediately available. Don’t let some minor confusion or even a handful of continuity errors ruin your fun. The way to enjoy Axe Cop is to accept things as they come.


I find that Axe Cop is a great comic to read with children, because it’s fascinating and imaginative and probably about as edgy as I would want children’s entertainment to get. Being written by a kid indicates that the content is probably going to be safe for most kids to handle, though that does depend somewhat on parental rules regarding exposure to violent content. That’s a judgement call that each family makes differently, and while I wouldn’t think that the type of violence in Axe Cop would be harmful to a developing psyche, I understand that others may have different attitudes. When I was in preschool I thought Power Rangers was the greatest thing ever created, and one of my friends wasn’t allowed to watch it, and I thought her parents were just insane or horribly cruel, but now I can kind of see where they were coming from, you know?

If you’re an adult, Axe Cop is tremendously fun. If you’re a kid, bug your parents to let you read Axe Cop, which shouldn’t be too hard because if you’re a kid and you’re reading my blog I’m guessing your parents let you read a lot of stuff. If you’re an adult who has kids in your life, introducing them to Axe Cop is a move that I would wholly endorse. This comic is a peculiar kind of wonderful, and everyone should have the opportunity to enjoy it. 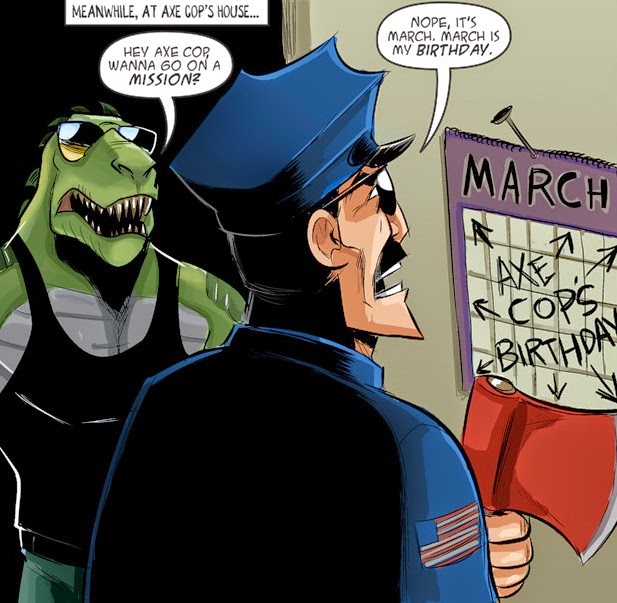 Axe Cop is written by Malachai Nicolle and drawn by Ethan Nicolle. Color, in the recent stories, is provided by Kailey Frizzell. The currently-running main story is a guest arc written by Charlotte and Amelia O’Brien and drawn by Tom Martin. Watch for mouseover text starting about here for the main comic and here for Ask Axe Cop.


I recommend Axe Cop to anyone who has ever enjoyed an action movie, or to anyone who think that maybe they would enjoy action movies if they weren’t all so darn serious. If you have any sense of fun at all, you really should give Axe Cop a try. It’s one of the most fun things I’ve ever encountered on the Internet, and there isn’t anything else quite like it. Go forth, and read about Earth-shattering events never encountered anywhere before or since. 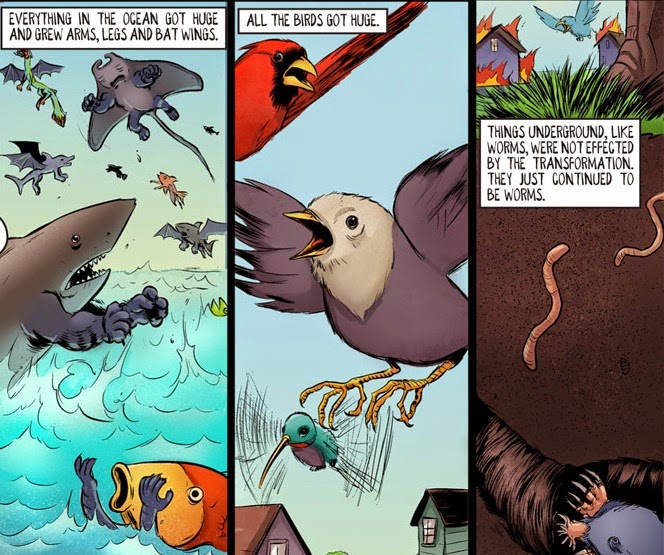