Friendship can be a fragile thing. Like all relationships, friendship requires trust. The problem with trust is that it can take a long time to build it up, but it can be destroyed much more quickly. Once trust is lost, it may never be gained again. Because trust isn’t something that everyone gets to have by default. It doesn’t just naturally build up over time. Trust has to be earned, and sometimes the task of earning it is so difficult as to seem impossible.


To witness some people struggle with the difficulties of trusting and being trusted, trying their hardest to work through friendships, look no farther than Nimona. 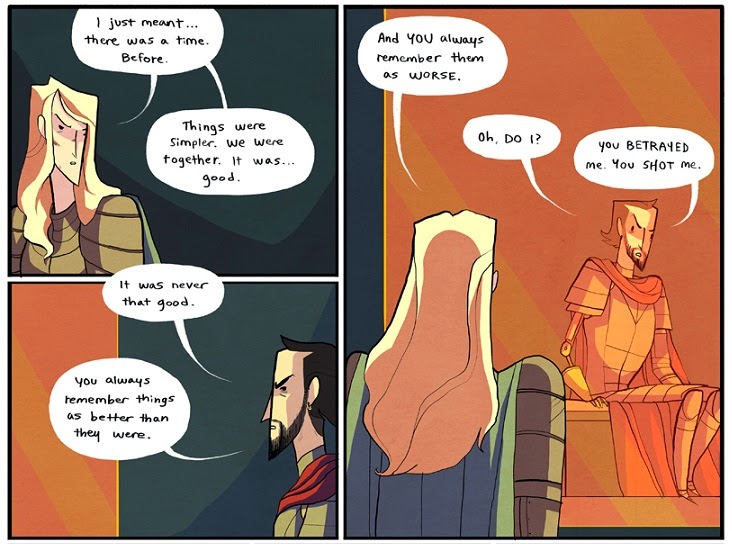 Nimona is a science fiction/fantasy hybrid wherein great plots and terrible villainy are the means by which a handful of people work out their feelings about each other. There’s some concern about the greater good, too, but their deep motivations tend to run more personal than that.


Note: Nimona is a narrative-based comic and must be read in order from the beginning. I’ll avoid major spoilers in this post but it will be impossible to discuss the comic without giving some things away. If you like going into a reading experience with a completely fresh perspective, I’d advise you to proceed with caution.


Lord Blackheart and Sir Goldenloin are former friends, current nemeses. There are implications that they were closer even than friends, but the precise nature of their past relationship will likely remain one that must be speculated upon. What’s clear is that Goldenloin still cares very deeply for Blackheart, and Blackheart is unlikely to ever again feel that Goldenloin is worthy of his trust. They’ve settled into a comfortable animosity, which is only interrupted by the introduction of a third element: Nimona.

Nimona, the eponymous character, is a shapeshifter who becomes Blackheart’s sidekick in villainy. She doesn’t respect the status quo that Blackheart and Goldenloin have established, and she wastes no time in changing everything. Blackheart’s moral code, and the equilibrium that has been established for years, go out the window. Everything is new and different, and for those who were comfortable with the way things were before, this change is decidedly unsettling.

It takes time and a lot of effort and compromises for Nimona to start to earn Blackheart’s trust, and it’s clear that Nimona doesn’t really trust Blackheart, either. Their friendship is tenuous; they worry about each other and develop a clear affection, but Nimona seems to have trouble trusting anyone, and she probably has good reason. Her interactions with the world take the form of teasing and sarcasm, presumably as a defensive mechanism. She’s definitely been hurt in the past, and caring about people is likely to get her hurt again.


Still, she seeks Blackheart out and deliberately forms a bond with him. A friendship is there, even if it has to be hidden beneath jokes and affectations of disinterest. 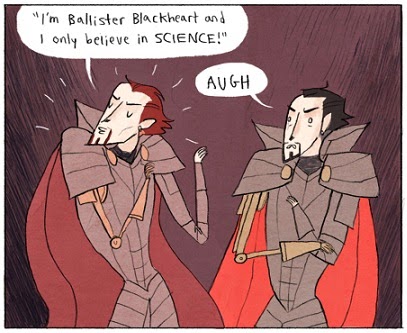 While Nimona really is all about the character relationships, one of my favorite aspects of this comic is the setting. It’s a medieval fantasy where technology is far more advanced than our current level. There are floaty computer screens and ray guns and there are dragons and some of the dragons are genetically engineered and people dress in suits of armor and stuff. It’s a bizarre mix of historical and futuristic visual themes, and it’s beautiful. I’ve never seen another world quite like the one in Nimona, and I find that the setting is compelling on its own, without the aid of character drama. These people live in a weird place, and I love learning more about how their world works.

One compelling aspect of this world is the coexistence of magic and science. The ray guns I mentioned? Those aren’t techno-magical weapons; they’re pure technology. For the most part, science exists on its own and has advanced independently from magical knowledge. This seems to be less because scientists are not interested in studying magic (because clearly at least some of them are) than because it’s very difficult to find magical phenomenon and subject them to study. Take, for instance, Nimona’s reaction when Blackheart suggests they run some tests on her shapeshifting abilities.


That above panel probably also has to do with Nimona’s general lack of trust in other people.


Above all, this comic is all about what it means to be a friend, to earn someone’s trust, and to lose their trust. The character dynamics here are strained; clearly people are trying the best they can, but they come from difficult circumstances and the right choices aren’t always clear. In a way, this is the ultimate example of what happens when people who should by all rights trust and care for one another dearly simply can’t afford to.


Sometimes I read this comic and it’s just heartbreaking.

Nimona is written and drawn by Noelle Stevenson, and updates on Tuesdays and Thursdays. The story looks to be nearing its conclusion, so read it now before it’s too late!


(Just kidding! I imagine you will still be able to read the story after the whole thing’s been posted. But seriously, you should go check it out now just because it’s there and you can.)