The traditional role of science is to explain how the world works. By contrast, the traditional role of mythology is to explain why the world works. Technology is what you get when you use science to create practical tools, and magic is what you get when you do the same with mythology. The intersection of the two, the unease with which magic and technology coexist and the amazing things that they can achieve together, is the backbone of Gunnerkrigg Court. 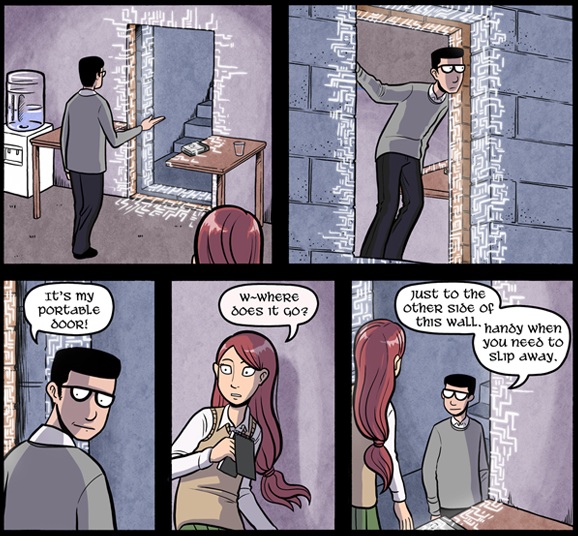 Gunnerkrigg Court, the location, serves as a school... and much more. Antimony Carver, the focal character, is a student at Gunnerkrigg Court, and as she learns more about the history and technomagical nature of the Court, so does the reader. 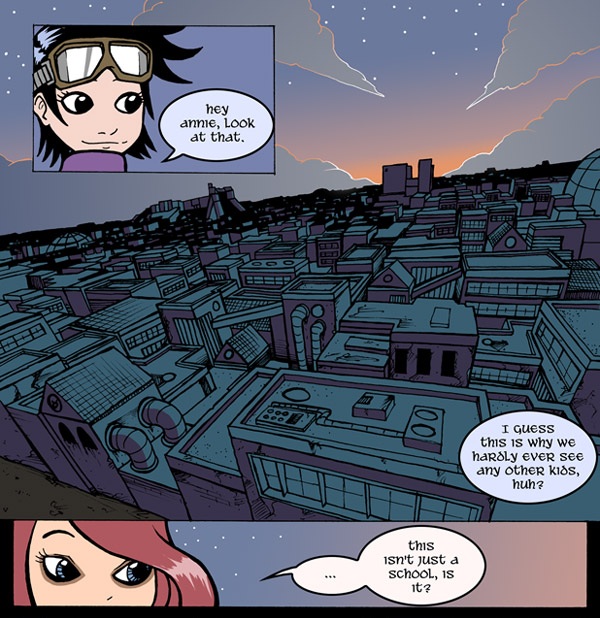 Note: Gunnerkrigg Court is heavily story-driven. I wouldn’t be able to do this review without spoiling a few things, but I won’t describe specific plot points, and I’ll keep any strong spoilers confined to material that’s revealed early in the comic. A major source of tension in this story is the slow reveal of information, both to characters and to the audience. Out of respect for that, certain parts of this post will be a bit on the vague side.


While the institution of Gunnerkrigg Court claims to focus exclusively on science, mystical and/or magical things are commonplace within the complex. Antimony encounters mythological figures there on a regular basis. Then again, she seems to have encountered them frequently before coming to the Court as well.

The fantasy elements of Gunnerkrigg Court mix together with and complement the science fiction elements. The school certainly lives up to its technological dreams. For one thing, they have what is effectively a working holodeck at their disposal. 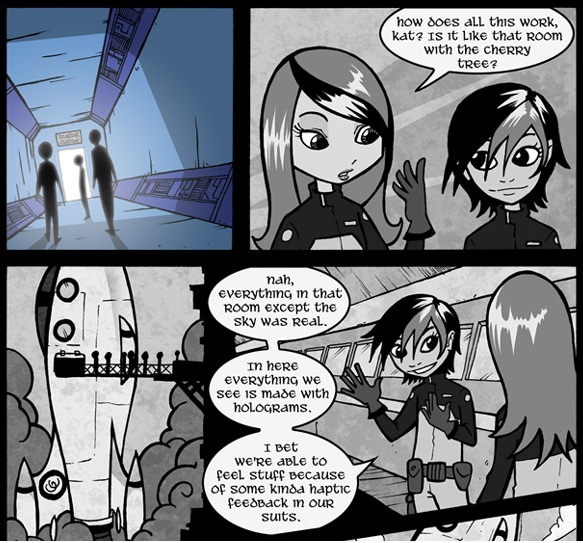 For another, the Court is absolutely full of robots.

The plot of Gunnerkrigg Court is complex and nuanced. Characters develop strong, believable relationships, and there’s a deep history to them and their environment. An idiosyncratic style to the writing keeps the sense of humor intact as the tone undulates from fun and humorous to intense and serious. The humor is extremely important to the comic, considering that much of the subject matter could contribute to a dour tone. As harsh as some events can be, there is always something silly and enjoyable to lighten the mood. 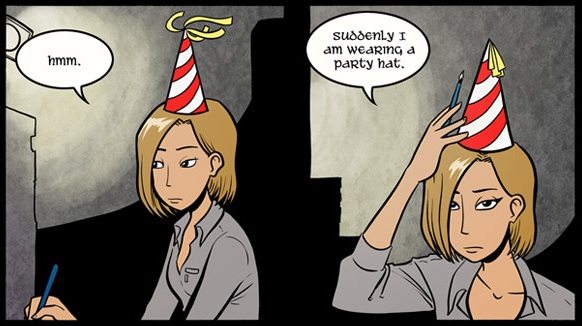 After all, it’s hard to let sad developments get you down when you remember there are such things as laser cows. 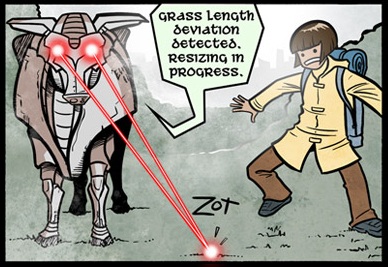 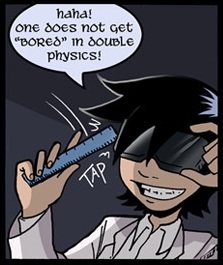 The visual style is versatile, and often changes to the art will represent changes in the narrative or the perception of characters. When the things we are shown are outside the physical realm, panel boundaries might disappear entirely as everything takes on a connected, flowing quality. 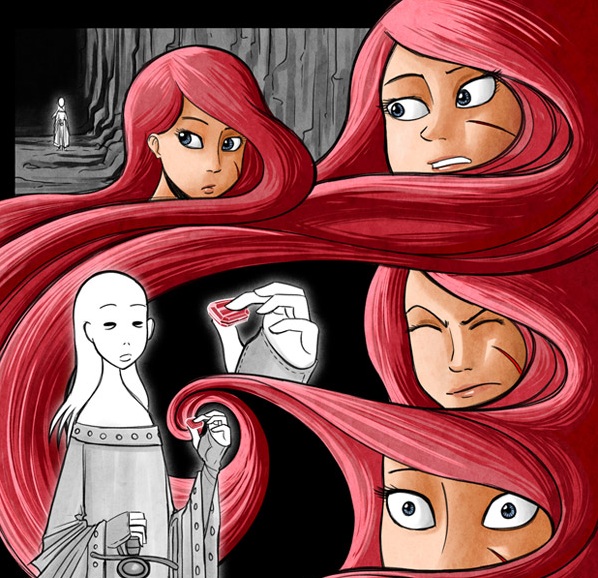 Speaking of things outside the physical realm, mythical beings show up from a variety of traditions. Gunnerkrigg Court features a melting pot of gods and other figures from all over the world. Naturally, there is typically more to these characters than is clear from their initial appearances. 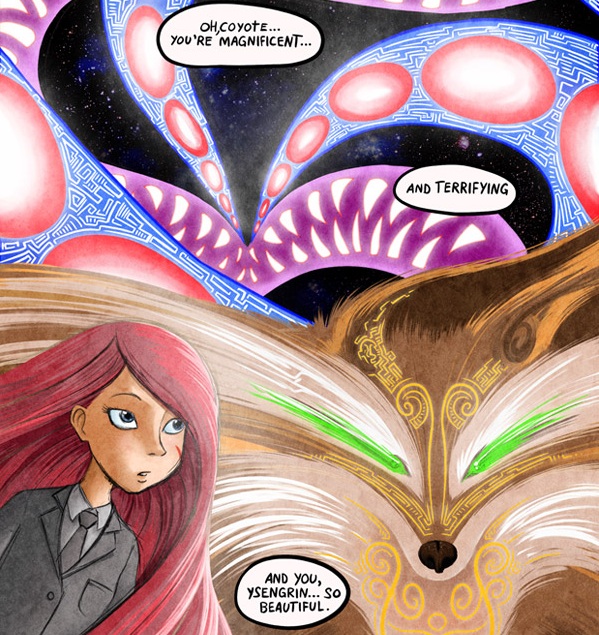 One thing I enjoy about reading Gunnerkrigg Court is being introduced to figures from mythological traditions I was unfamiliar with. Well known figures like the Minotaur show up, but more obscure characters such as Muut or the Moddey Dhoo make frequent appearances. Just as Lackadaisy or Luther Levy often teach me about history, Gunnerkrigg Court often teaches me about mythology. 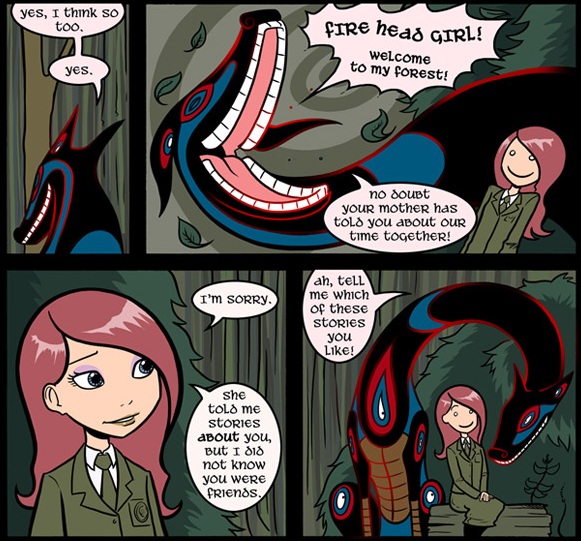 Overall, Gunnerkrigg Court offers compelling storylines and character development in a fleshed-out sci-fi-fantasy setting. Though many elements of the story are familiar, they’ve been put together in a novel and engaging manner, and the comic is full of delightful surprises. From the big mysteries such as Antimony’s family history, to the little details such as the merostomatazon Court employees, there is always more to uncover. 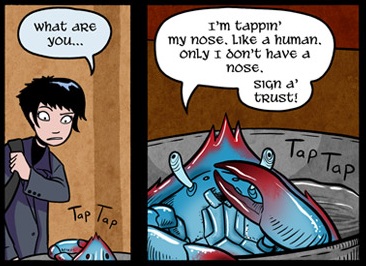 Gunnerkrigg Court is written and drawn by Tom Siddell and updates on Mondays, Wednesdays and Fridays. It’s a good comic for kids, though some of the situations in the comic could be a bit frightening for young children, so I might recommend waiting until they’re 10 years old or so, depending on the kid in question. 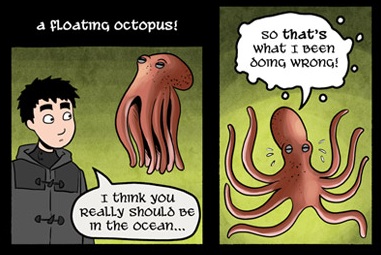 Previous Entry: Dresden Codak
Webcomics Worth Wreading Archive
Next Entry: Scenes From A Multiverse
Posted by Unknown at 7:06 AM