Webcomic Worth Wreading, Entry Ten: Scenes From a Multiverse

Assume the universe is infinite. Eventually, given all of time and all of space, every conceivable thing that could happen, will happen. If you could travel instantaneously from place to place, you could then bear witness to events that are amusing, heartwarming, that seem to parallel events from our own experience or that simply appear completely absurd. To get an idea of what that experience might be like, you could start by reading Scenes From a Multiverse. 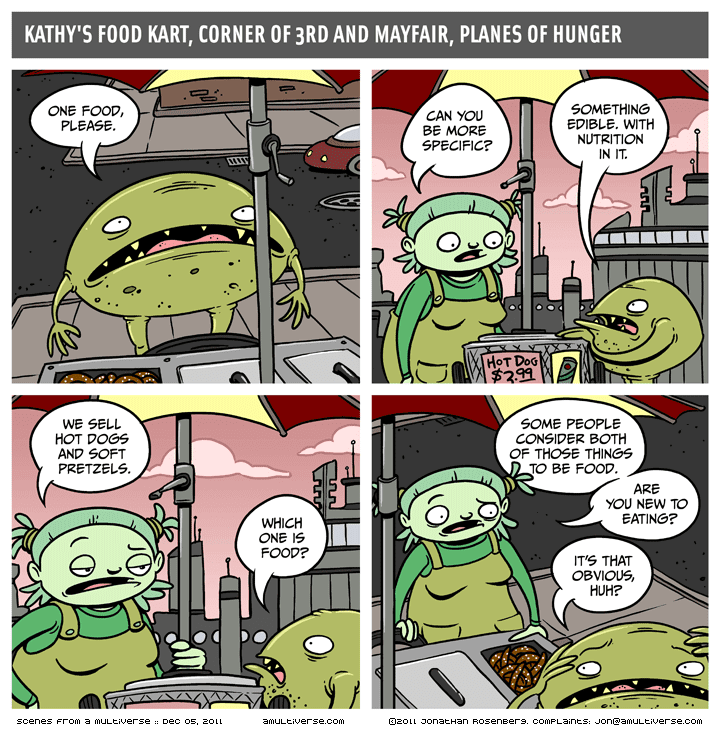 Scenes From a Multiverse provides satire, parody, highbrow and lowbrow humor, poignant reflections on humanity... anything and everything is on the table. Sometimes it’s wordy and complicated, and sometimes it’s just bunnies. 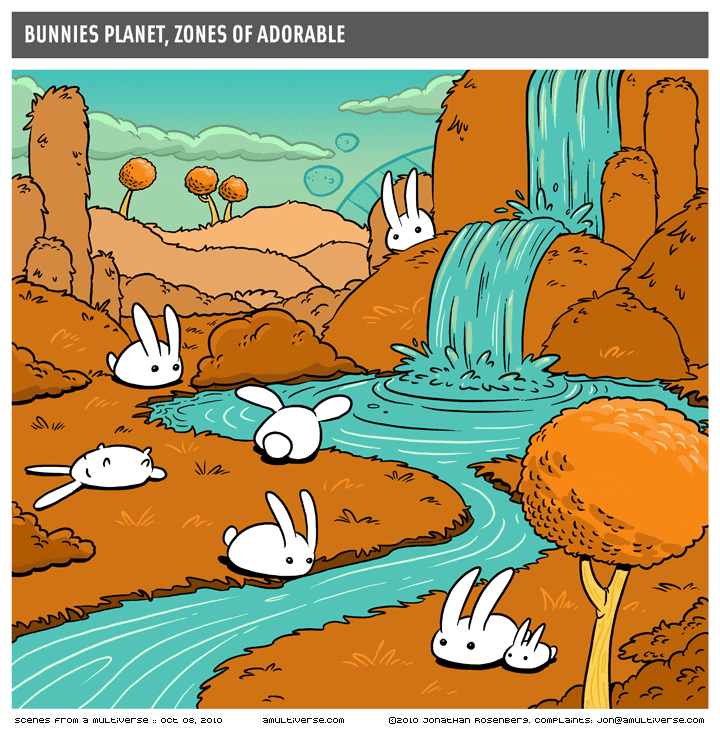 Technically speaking the strips all take place in continuity with one another, but typically each one exists in isolation. Every new comic is an opportunity to see a new, previously unexplored corner of existence. Occasionally a setting will appear multiple times, and sometimes a story will develop over multiple installments, but the essence of Scenes From a Multiverse is the continual introduction of the new and unexpected. 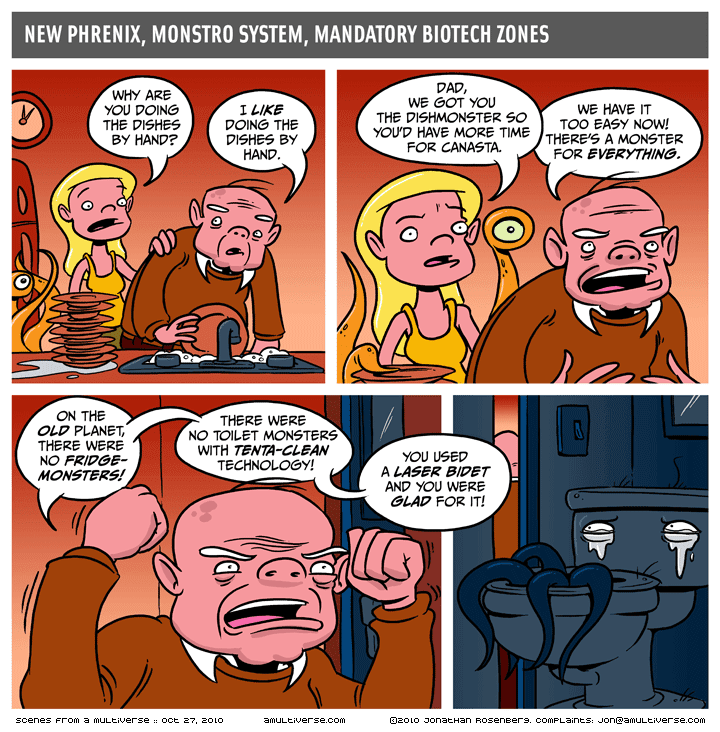 When Scenes From a Multiverse launched, a poll once a week determined which of that week’s locations would return in another installment. The mechanics of that process underwent some early permutations, and the practice has now been discontinued. If you read through the archive from the beginning, you will notice some changes over time in terms of the frequency and nature of the locations that see repeat visits.


There do seem to be a few constants in the multiverse. The Corn God is the deity of choice in most places, with occasional competition from Ultragod. People who do experiments are called Sciencemasters, though the level of respect and funding they receive varies. Most households get the latest news updates for their sector straight from the bill of Duck Thompson.

Current events and controversy, particularly that regarding politics and/or religion, provide frequent subject matter. Using a science fiction lens to look at our own world from a fresh and revelatory perspective is a tried and true form of social commentary.(This strategy can be seen in works as old as Gulliver's Travels.) You’ll typically find some sort of twist on the expected message. The more reasonable party might embrace a clearly ridiculous idea, or the straw man might turn out to have significant justification. Sensible ideas are subjected to reductio ad absurdum, and crazy ideas are treated with utmost respect and sincerity. The tone varies from one comic to the next, from one corner of the multiverse to another, from one joke to the following plea for reason. 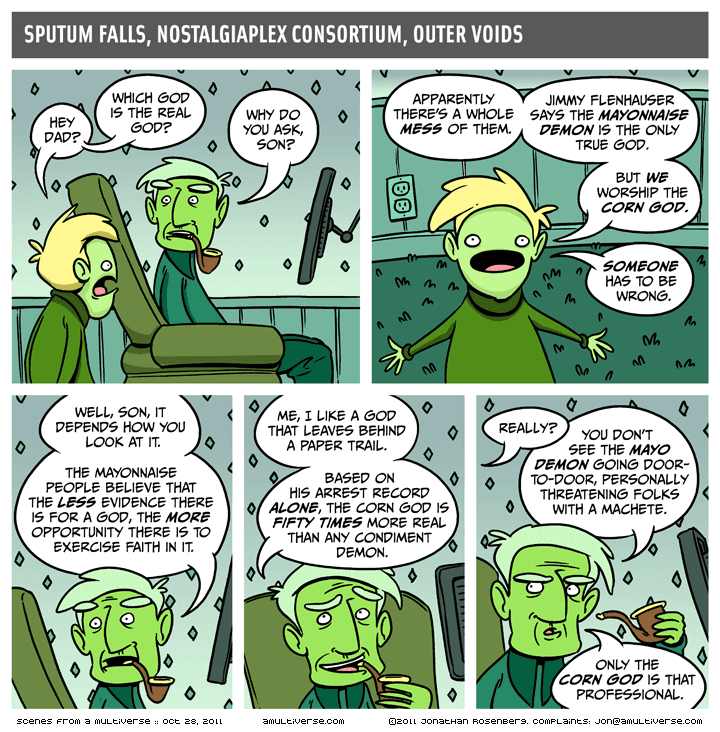 Part of the fun is seeing new and interesting alien designs from one installment to the next. Sometimes they are color-swapped humans, sometimes they are elaborate creatures, and sometimes they are simple oblong blobs. Whatever form of being is the focus of the moment, it’s always enjoyable to see what’s being offered and to wonder what we’re going to see next. 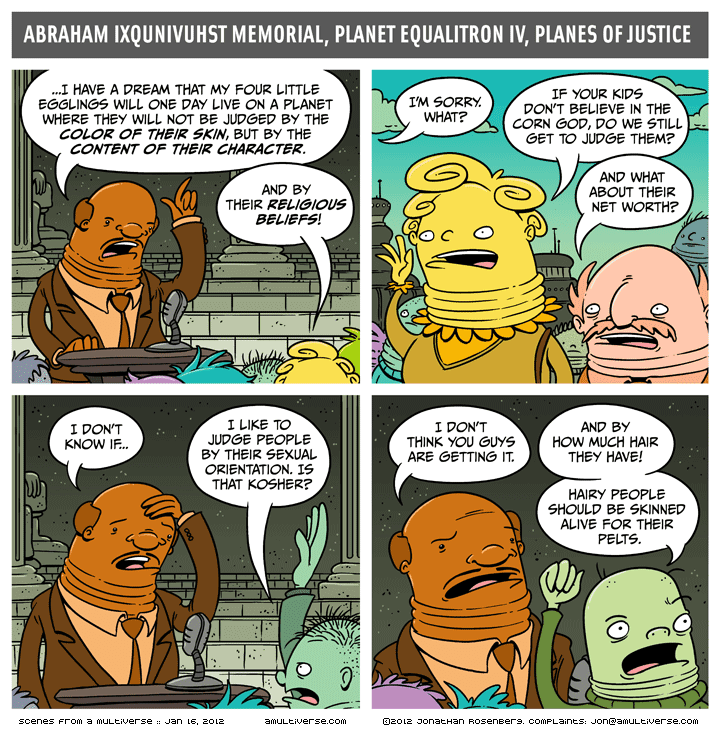 There are lots of intense, conceptually intriguing installments that make points about life or philosophy, and those are wonderful. But there are also simpler entertainments. “Variety” is the key word for Scenes From a Multiverse. Some days you get a lesson about the public perception of atheism, and some days you get a fart joke. When the comic isn’t about a message it feels quieter and more low-key, but it still carries a sense of commitment and passion.
Some of the jokes that have made me laugh the hardest are those with the simplest concepts.

I guess I have a weak spot for miscommunication. In addition to the failed conversation above, another comic that made me laugh to no end concerns misheard lyrics to “Get Back.” 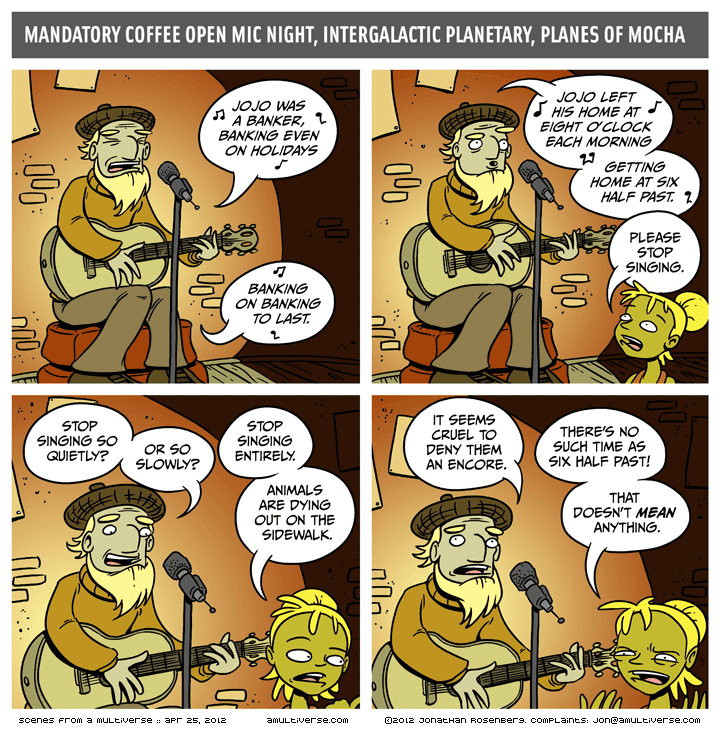 If miscommunication is funny on its own, when you combine it with satire you get a veritable powerhouse. After all, political discussions consist almost entirely of both sides actively refusing to listen to what the other side is actually saying. What you wind up with then is willful miscommunication. If you already think you know what the opposition is saying, there’s no point bothering to listen. Be prepared for sarcasm, silliness, and cynicism. These qualities are broken apart and recombined in a multitude of permutations, and every time I see something new I’m excited to read it. Depending on the mood of the day, Scenes From a Multiverse might express hopes, fears, or merely a skewering of the status quo.

I'm going to take a moment here to tell you how much I friggin' love Empress Mrs. Spelt. 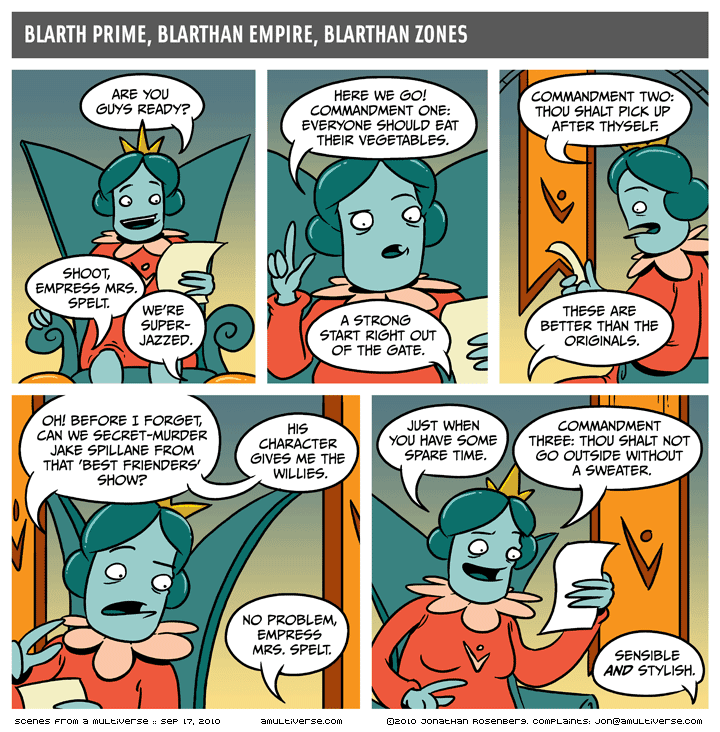 So! What we have here is a gag-a-day comic with new characters and locations appearing in almost every installment. The throughline that keeps them connected is a shared sensibility and visual style that keeps everything engaging and entertaining. There will always be something new to see, and that means I will always look forward to seeing it.

Scenes From a Multiverse is written and drawn by Jonathan Rosenberg and currently updates on Mondays, Wednesdays, and Fridays, though updates do not always go up on schedule. Oh, and take note: There is mouseover text on all of these strips. (You have to go the comic website to see it, I didn't copy it over to the blog.) Don't miss out, read it all!

Webcomics Worth Wreading Archive
Next Entry: Power Nap
Posted by Unknown at 7:04 AM