When confronted with something so totally outside the social norms that there is no way to determine an appropriate response, a human will often resort to laughter. Shock humor exists entirely because of this phenomenon. Overall, I’m not a fan. Making audiences uncomfortable through use of profanity and/or taboo subject matter may get you laughter, but it doesn’t give your jokes any substance.

There are, however, a handful of artists who do both. Their work combines shock value with observations on human nature, irrational actions taken to absurd extremes, or old ideas presented in new and unexpected ways. Today we’ll look at a webcomic that does all of this and more, walking the line between crude and pretentious as few others can. I present to you: Saturday Morning Breakfast Cereal.

Saturday Morning Breakfast Cereal is a gag-a-day comic that is at turns delightfully irreverent, heartwarming, cynical and philosophical. Each installment stands on its own, entirely disconnected from whatever came before or since. There’s no need to read them in order, no spoilers or recurring characters to worry about. Feel free to jump in at any point in the archive, to read them all in chronological or reverse-chronological order, or to just hit the “random” button a few times and see what you get.

Certain visual shorthands are used multiple times, such as the representation of god as a sort of shining golden disc, but it’s always easy enough to understand what’s going on.

I certainly won’t discourage binge-reading, because there’s a lot of great material in that archive, but that’s not necessarily the best way to enjoy this comic. Don’t feel pressured to get through all 3,000-plus pages. Just browse awhile and enjoy what you see.

A lot of the jokes are simple, relying on literal interpretations of speech or just presenting a reversal of what’s expected in a given situation. Many installments are single panels, which aren’t actually comics according the McCloudian definition but, hey, I’m here to talk about the stuff I like, not quibble over terminology.

One hallmark of Saturday Morning Breakfast Cereal is a reversal in tone, taking something apparently innocent and making it depraved, or something apparently horrific and presenting it as innocent. Sometimes these switches will pile up, as the scenario switches back and forth between comfortable and terrifying until the audience doesn’t know which way’s up anymore.

This is a comic with no limits. Any subject matter is on the table, from base observational humor or discussions of advanced mathematical theorems. Highbrow and lowbrow subjects often mix, leading to crude jokes about sophisticated subjects or apparently sophisticated setups that lead up to an inevitable joke about penises. Sometimes the humor lies in these unexpected juxtapositions of subject matter, but often that’s just the starting point. Dismiss closely held ideals, take ridiculous notions seriously, and treat the world as a breeding ground for absurdity, and you’ll begin to understand this comic’s sense of logic.

One of the best examples of Saturday Morning Breakfast Cereal’s peculiar composition of usually disconnected elements can be found below, where a pair engage in a classic comedy routine with a twist.

The thing that I love most about Saturday Morning Breakfast Cereal is its political conscience. That’s an odd thing to say about such an irreverent and crude comic, but I find that it promotes a worldview I believe in, one of acceptance and cooperation, quite consistently. A handful of installments are overtly political or satirical (see this, and this), but what I appreciate more are the subtle ways that the comic consistently reinforces an open and egalitarian viewpoint without overtly stating it every time.

When the race or sex of a character is not relevant to the joke, that character may have any of a wide range of appearances. Women and people of color are shown in positions of power, because there’s no reason for them not to be. Same-sex couples show up even when the joke doesn’t specifically require a same-sex couple in order to make sense.

In Saturday Morning Breakfast Cereal, straight white and male is not the default setting from which all other humans deviate. I wish more media represented this kind of diversity on a regular basis, so I like to acknowledge it when I do see it with the hope that others will start picking up on the idea.

One thing you should be aware of is the red button below each comic. Click on it for a bonus! The earliest installments don’t have anything, the first one being here, but it works for almost all of them after that point. Usually it’s just a little added joke, but sometimes it really makes the comic seem worthwhile to me. For instance, I wouldn’t be nearly as fond of this one:

If it didn’t include this: 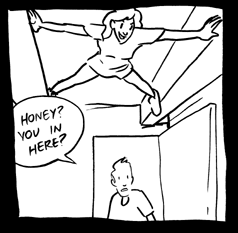 Saturday Morning Breakfast Cereal is written and drawn by Zach Weinersmith (né Weiner) and updates every single goddamn day, pretty much. I recommend it to people who are looking for a quick laugh but who secretly want to get sucked into a debate about a philosophical conundrum. By which I mean, humans are weird and I invite you to go laugh at some.