Today’s comic is about a group of friends who take games very seriously. Some might say too seriously, but that’s a matter of personal opinion. Indeed, the separation between “geeks” and “others” tends to be a matter of what they define as “too seriously.” While a “normal” person might look at a group of people who are heavily invested in the plot of a D&D session and declare them to be taking it too seriously, the geeks who are playing the game most likely think they are taking it just seriously enough.

There are geeks doing this all over the world, but we’re going to focus on one group in particular. We’re taking a look at the lives of the cast of Weregeek.


Note: Weregeek is heavily continuity-based and the story won’t make a lot of sense if you don’t read from the beginning. However, many individual installments can stand on their own, and I’ll avoid spoiling any plot points in this post. This is a rare case of a story comic that I don’t think suffers for knowing a little extra before you start reading, so I wouldn’t worry too much about it if I were you.

There are many kinds of geek, and the ones in Weregeek are of the gaming variety. They play Dungeons and Dragons, other dice-rolling rpgs, and sometimes do live-action role-play, which in their case usually consists of pretending to be vampires.

The story alternates between showing us what’s going on with the characters and showing us what they’re doing in their games. Each game has its own plotline, which will progress when the characters play… resulting in a handful of stories that are only picked up on rare occasions. There’s just not enough time in the characters’ schedules… or the author’s life… to keep everything moving forward all the time.

My favorite is the vampire larp. I always look forward to finding out how things are going when they get to another session of that. But they’re all compelling in their own ways.

The heart of weregeek, I feel, is in the character interactions. I like watching this group of friends through their personal character development and the shifts in their relationships. This mostly has to do with Mark, the outsider, getting to know the others better and becoming firmly entrenched in this tight-knit group of friends.

Character development happens gradually over time, so slowly that you can’t always see it in action. It takes looking back on subtle shifts to really get an idea of how these people and their relationships are growing.


As such, most of what I feel are the most important parts of Weregeek happen when there’s not a lot going on, plot-wise. When characters sit around talking to each other, making terrible puns or just enjoying each other’s company, that’s when I love this comic the most. It’s not about the particular conversations or the punchlines, it’s about seeing these people hang out and be friends.

Even early on, there are hints that these characters don’t quite live in a world exactly like our own, but it’s difficult to tell for certain. The typical geek-jock rivalry takes on new dimensions in Weregeek, though the non-geeks aren’t necessarily jocks. Some aspects of this storyline bother me, painting an arbitrary line and declaring that those on either side must be mortal enemies, but I’m waiting to see how things resolve before I cast judgement. I think it’s entirely possible that things will be less black-and-white than either side believes.


The visual shorthand for “geeking out,” representing the geek in question as a shadowy, almost monstrous figure, is more literal than symbolic. 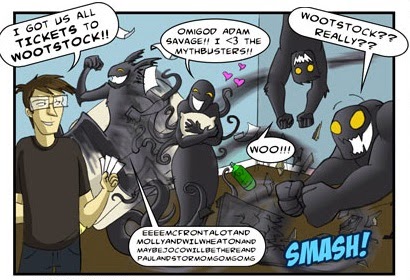 At times, this real-world conflict feels so similar to a role-playing game that I wonder if there’s not something else going on behind the scenes. For the meantime, I have to be content to wonder.

The story in Weregeek progresses slowly, in such a way that I think it is better read in large chunks than with one day’s installment at a time. It is certainly easier to keep track of things when reading through large swaths of the archive than while following daily updates. Not only will details be more fresh in the reader’s mind, there will be less likelihood of frustration while waiting for a particular plot line to be picked up again. This is definitely a good comic for binge-readers.

Get into the story, enjoy some jokes, become invested in the character drama… there are a lot of ways to enjoy Weregeek, and hopefully you will find some of them to your liking.


Weregeek is written and drawn by Alina Pete, with some help on the writing side from Layne Myrhe. It updates Monday through Thursday, and usually has a sketch of some sort put up on Fridays. I recommend it to people who totally know all about larping, and to people who don’t know anything about larping but find the concept interesting. 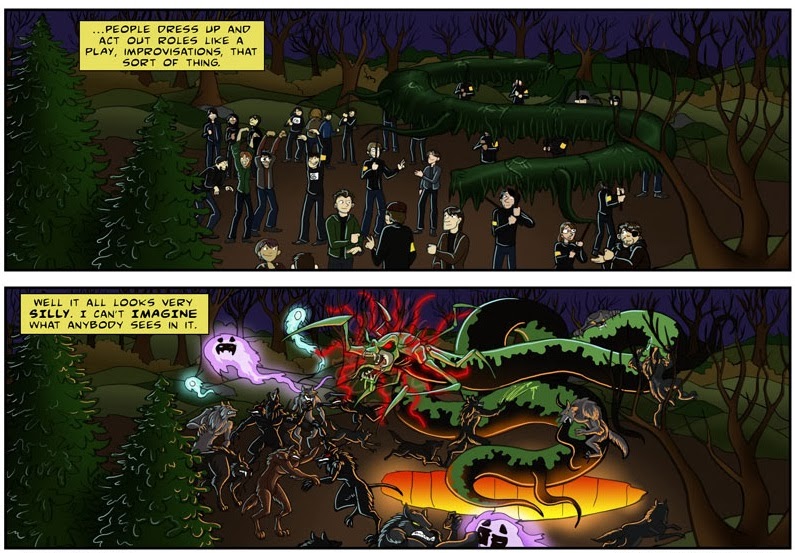